Yes, I Successfully Potty Trained My Toddler While I Had COVID-19

The COVID-19 pandemic has spread like a wildfire across the world and has affected most, if not all of our lives. Back in November, both my husband and I tested positive for the virus and were quarantined together along with our three-year-old son.

My symptoms included a fever, congestion, and a cough that rivaled any long term pack-a-day cigarette smoker’s cough. On top of all that, there were three long days where my body just refused to cooperate with me, making getting out of bed just to walk to my kitchen a near-impossible task. Long story short, I was feeling pretty crappy.

Now just imagine, with my body at its weakest point, a highly energetic three-year-old ruling the house. Thankfully, my son only suffered a runny nose and a mild temperature, but his energy levels never dwindled. My husband and I could barely stay alert for more than a few hours at a time, often changing shifts to keep an eye on our rambunctious three-year-old.

As we increasingly got sicker and the power shifted in the house from parents to a toddler, our three year old became more and more independent. He learned how to turn on his favorite shows, access his favorite ready-made meals (I usually meal prep for him and he has his own space in the fridge that’s easily accessible), and keep himself occupied. I always say that children are highly sensitive to the energy around them and this was manifested through how my toddler understood that mommy and daddy were sick and may need some extra time to feel better. However, every other hour or so, we’d hear the heavy running of tiny feet to our room, to be greeted by a stinky toddler who urgently needed a diaper change.

Oh! The effort it took for us to get our fatigued bodies out of bed to change a wriggling toddler! Around the third day of us being sick, around when my symptoms were the worst, my three year old hesitantly knocked on our door to tell me that he made a “mess”. To my shock and surprise, there was poop (cringes) EVERYWHERE. At some point during one of my many fever-induced cat naps, my toddler took a massive dump in his diaper, continued to play, as usual, causing the mess to escape his pants and get onto our floor. After my internal panic attack, a bath for my toddler, and LOTS of Lysol later, I made the decision that potty training (which took a hiatus after a previous failed attempt) was my top priority.

I spent the rest of the afternoon scouring Facebook groups, mom-blogs, and posts by health experts on the best potty training methods. We decided to roll up our rugs, cover our sofas, and strip our toddler down to run free around the house, setting a timer for every fifteen minutes to place him on the toilet. (I didn’t have the patience to clean a potty).

The entire process took us about four days of intense potty training, what I’ve now dubbed Potty Training Boot Camp. The first three days were messy. Days one and two consisted of us carrying our toddler mid-pee to the bathroom often leaving a trail down the hallway. Around the third day, I’m pretty sure he was annoyed with me constantly asking if he needed to go potty so he started heading there regularly on his own. We did have a few accidents, of course, a few times when he just couldn’t put down what he was doing and didn’t make it to the bathroom in time and a few times when he would slightly miss the toilet. But he was getting it! My husband and I were both in awe and excited every time we’d hear his feet run to the bathroom. Day four, we were still sick and still intensely potty training. I’ll tell this story for as long as my son allows me to, but on the fourth night, he attempted to take his first BM in the toilet. He missed and attempted to clean it up. As I entered the bathroom, I noticed little brown handprints, ALL over the walls, the toilet, the toilet paper holder, and the sink. My toddler looked remorseful, repeating “I’m sorry mommy” and “I’ll help you clean it up”. After a nice bath and a freshly cleaned bathroom, he tried again and successfully used the toilet all on his own!

We were ecstatic as a family. Despite our illness, we made sure to make our toddler feel proud and how proud we were about his new accomplishment. We showered him in praises and after that day, he continued to use the toilet all on his own and was proud to sport his new “big boy” underwear.

I wanted to share this little story in the hopes of brightening someone’s day. Yes, we were suffering from COVID-19 as many have this year, but we managed to do something positive with our extra time. If you’ve come down with the virus, don’t pressure yourself to accomplish something, but take pride in the seemingly small things you can get done – whether it’s just getting out of bed for a few minutes, reading a book, or potty training your toddler. 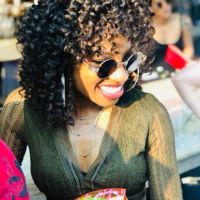